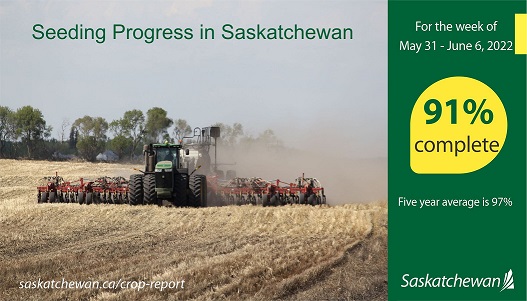 Over the past week, producers across the Saskatchewan grain belt took advantage of dry weather that allowed for substantial progress with their seeding operations. Ninety-one per cent of the 2022 crop has been seeded to date across all regions of the province, up from 76 per cent last week and just behind the five-year average (2017-21) of 97 per cent. While seeding is being reported as 91 per cent complete across the province, it is important to note that there are many acres in east Saskatchewan that may not be seeded this year due to excess moisture and standing water. Some fields in the southwest and west central are being reseeded due to poor emergence and heavy insect damage.

It was a relatively dry week for most of the province, however the southwest finally received some rain showers that were greatly appreciated and will hopefully improve their crop and pasture conditions. The Consul area received the most rain with 58 mm, the Maple Creek area 20 mm and the Shaunavon and Admiral areas 16 mm. More rain is desperately needed in the west-central and southwest regions. Producers in these regions are becoming anxious about how much longer their crops can survive without moisture. Dry weather allowed for many fields in the east to dry out enough to allow seeding and producers are hopeful that weather will continue to be favourable enough for them to go back out and seed low areas before the seeding window closes.

The majority of crop damage this week was due to strong winds, frost, drought, insects (including flea beetles, grasshoppers and cutworms); some farmers are reseeding due to flea beetle and cutworm damage.

Farmers have been busy spraying for weed and insect control, picking rocks, rolling lentil and moving cattle to pasture.