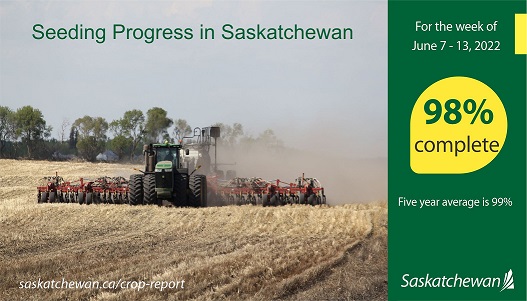 Producers were able to wrap up most of the seeding operations in the province over the past week with 98 per cent of the crop now in the ground. There is still some seeding to be done in the east half of the province, where small portions of fields were too wet to seed. With recent rain in the region, these areas will likely go unseeded this season.

Multiple rain showers and thunderstorms hit the province over the past week. Several areas reported minor to severe flooding. While the rainfall caused damage in some areas, it was still very welcome to those who were desperately in need of moisture. In the west, the rain will hopefully allow crops to recover from the drought conditions, but due to the localized nature of the rainfall, much of the western regions will need more widespread rains soon to keep crops from failing. Some areas received hail over the past week, damage is currently unknown since many crops have not yet emerged, but enough hail was received in some areas to make it appear as if it had snowed.

The most rain was received north of Rosetown, in RM 317, where over 125 mm was recorded Monday night; the area experienced some flooding but most of the water was able to soak in. The Biggar area received 69 mm, the Dinsmore area 65 mm, the Bienfait and Rhein areas 41 mm, the Duck Lake area 34 mm and the Tyner and Bruno areas 25 mm. Many other areas received rain this past week.

With the rainstorms came the wind, which delayed many producers from being able to spray for weeds and insects such as flea beetles, cutworms and grasshoppers.

Provincially, 69 per cent of fall cereals, 60 per cent of pulse crops, 50 per cent of spring cereals and 41 per cent of oilseed crops are at their normal stages of development for this time of year.

Crop conditions across the province mostly range from fair to good. With the recent rains, producers are hopeful that conditions will improve, especially in the west. Most damage this week was from drought, flooding, insects (flea beetles, grasshoppers and cutworms), gophers, hail and wind. Producers have wrapped up some of their reseeding operations and are now turning their focus back to spraying to keep pests under control.